FastSitePHP includes the ability to encrypt files using both a PHP Class and a compatible Bash Script. Bash is the default shell on many versions of Linux and on macOS; it is also widely available on other Unix Like OS’s such as the BSD's (FreeBSD, NetBSD, OpenBSD, DragonFlyBSD etc). Bash can also run on Windows using the Windows Subsystem for Linux or third-party tools.

This page shows how to use the bash script and provides details on how it works.

Screenshots on this page were created on Mac using SSH and Terminal to connect to an Amazon Web Services (AWS) Lightsail Servers. The IP addresses and any server info shown on the screenshots are from temporary servers that no longer exists.

To run using Bash run the command bash encrypt.sh from your shell or terminal program or to run directly run the command ./encrypt.sh, but you first need to make it executable by setting the permissions running chmod +x encrypt.sh however this typically won't be required.

When you run the script without any options or using the ./encrypt.sh -h Help Option you will see info for the command, usage, options, and examples.

This script has no dependencies other than commands that are expected to be installed on most Linux OS's. The actual commands for encryption and decryption work with FreeBSD, however FreeBSD does not include Bash by default. Red Hat, CentoOS, Fedora and some Linux installs won't have the required command [xxd] installed by default so this script provides a warning and info on how to install if needed. 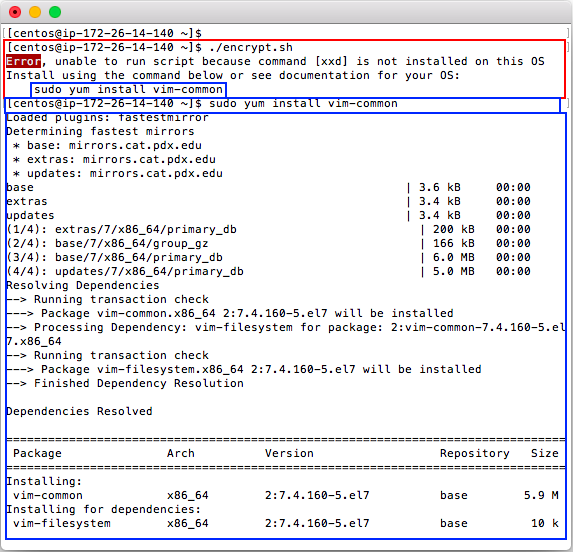 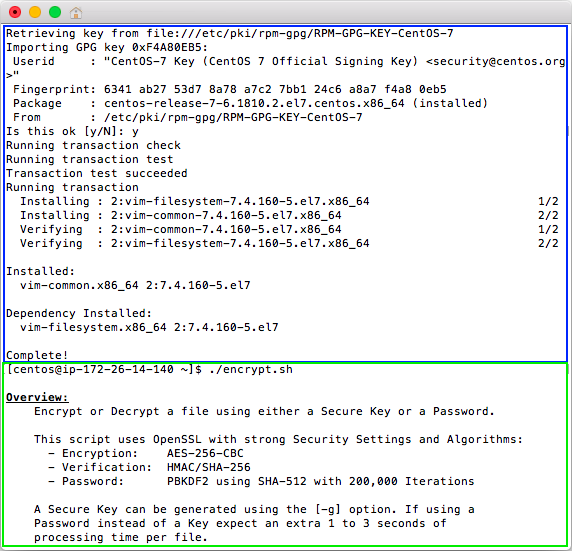 To encrypt a file use the -e option and specify the {input-file} (file to encrypt) and {output-file} (encrypted file). You can use a -k Key, -p Password, or leave the parameter blank in order to be prompted for a password.

Encrypted files are un-readable so the command head -c 256 test.enc | hexdump -C -v is used below to show the file bytes using a hex viewer. Also in the screenshot the key is read from a file and passed to the command using "$(cat encryption.key)".

This screenshot shows an example of decrypting a file using a password that is entered hidden in the terminal. The option -p is available for using passwords however it may result in your password being saved to shell history so if you are using this script with a password leaving the option blank is recommended. If using a Password instead of a Key expect an extra 1 to 3 seconds of processing time per file.

The script is safe to run and prompts you before overwriting any files. Additionally if there is an error or the file cannot be decrypted you will see a clear error message.

On most systems you can install the command globally using sudo mv encrypt.sh /usr/local/bin/encrypt. You can then simply use the command encrypt from any place on your shell/terminal.

This script has the ability to run unit tests using the option ./encrypt.sh -t. Unit Testing helps verify that your system works properly. 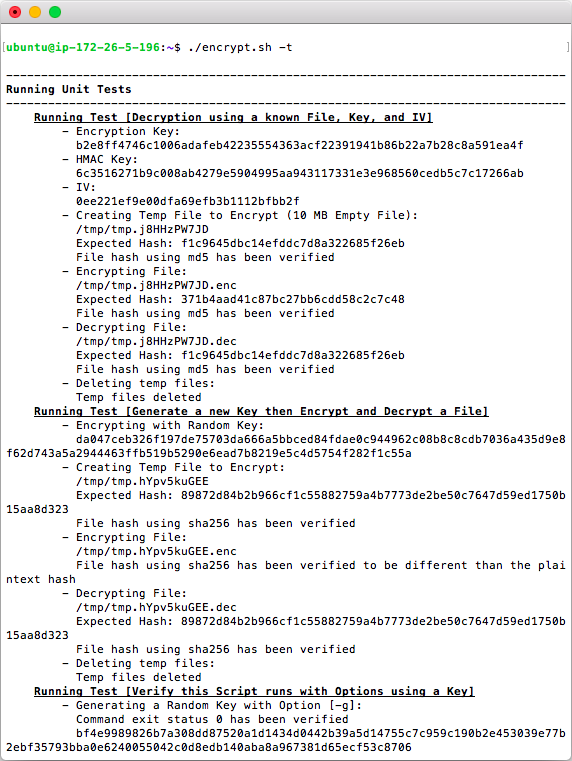 Unit Tests typically run between 3 to 20 seconds depending on the speed of the computer. Once complete you will see the result. 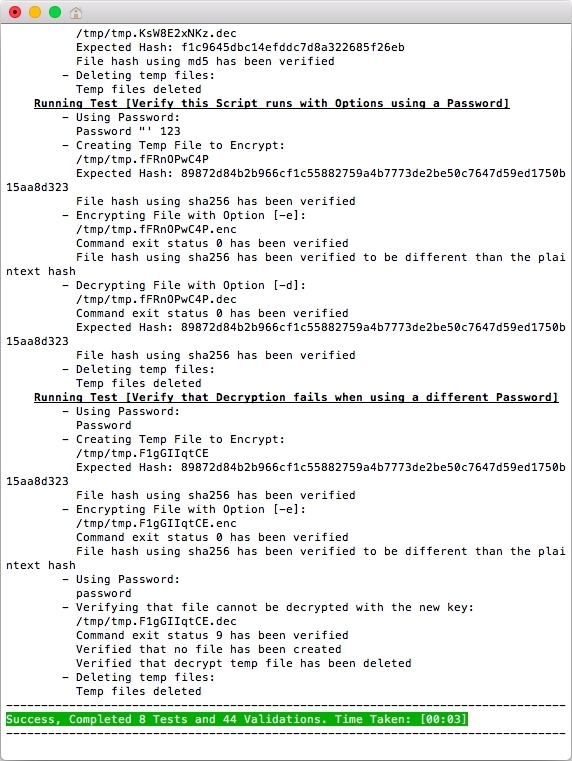 The option ./encrypt.sh -l can be used to verify that large file encryption is supported on your system. This option will create files of 1 GB and 3 GB in size and requires at least 9 GB of disk space. The -l option may take anywhere from several minutes to over 30 minutes depending on your system and disk speed. If the core Unit Tests -t work on your system then the large file test is also expected to work on almost all systems. It would fail if your server does not allow files larger than 2 GB to be created (32-bit max size); most 32-bit instances of Linux will allow files larger than 2 GB. 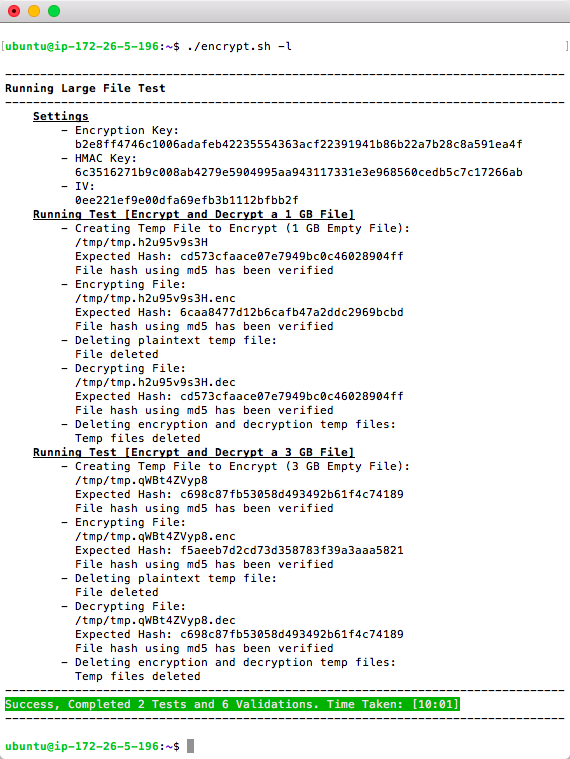 When using Passwords, Encryption Keys are generated using PBKDF2 (Password-Based Key Derivation Function 2). Bash/Shell does not provide built-in support for PBKDF2 so one of the following languages is used to derive the password [node, python3, php, python, ruby]. The ./encrypt.sh -b option can be used to see which languages are used and working for PBKDF2; only 1 language is required to be installed in order to use passwords and most systems will have at least one of these languages. 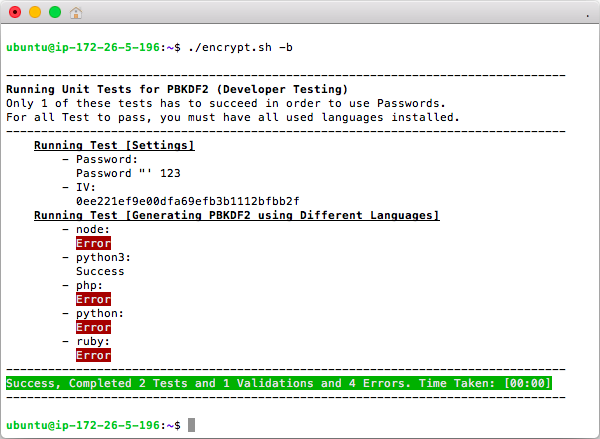 Internally the script uses [openssl] to perform both encryption and HMAC authentication. [openssl] is included with all Linux and Unix computers. The code below shows step by step the commands needed to perform encryption and decryption. The bash script itself is much larger (~1,500 lines of code) because it has a lot of safety checks, includes help, validation, unit tests, and supports passwords.

Full understanding of these commands requires good knowledge of encryption terms and how encryption works, however this code includes many comments and can be simply copied step by step to see how it works.